I start here a new post about the Native JavaScrip to differentiate it from the EvalJS function in which I had previously put it...

I discovered one weekago that it was possible to add comments in Ninox. In fact, this notation was originally intended to be able to add JavaScript code directly into the Ninox code. The structure of the function is there, but it was left as a skeleton.

I just added a NativeJS module in the Ninext project (see Ninext project) which gives the possibility to add JavaScript blocks in the Ninox script. As an example, this is what it looks like :

Everything between #{...}# is in JavaScript, the rest is Ninox code.

I worked a little bit to make it possible to use directly Ninox variables and function parameters in the JavaScript. It is also possible to define the type of variable that return by the JavaScript code. This allows, for example, to manipulate variables of type NID (list of records) and to retrieve the value as if it had been created by a Select function.

This example takes a list of records sorted in an ascending way (the only one that is possible on Ninox) and reverses the sorting to make a descending list :

It is this notation at the very beginning of the JavaScript block that defines the type of value returned. Here we ask that the result be a list of entries in the Customer table.

It is important to understand that Ninox is a precompiled code that determines in advance the nature of the returned variables, whereas JavaScript is interpreted in real time and we cannot predict in advance what type of value will be returned (unlike TypeScript). To switch from one world to the other, a minimum of definition is required.
By default, the type returned by a JavaScript block is Text.

It is also important to remember that this code only works if the Ninext project is initialized. The Ninext project is only initialized locally on the Mac application, iPhone IPad or on the local web browser. It is not initialized on the Ninox server. So if you use JavaScript blocks, you have to make sure that they will never be executed on the server, for example by API calls that would read the value of a formula (only the eval/exec function of the API can read the value of a formula).
If ever a block is executed on the server (or locally when Ninext is not initialized), the block is considered as a comment, as if it was not there.

I've attached an example database that I hope will help you get started with JavaScript block integration. 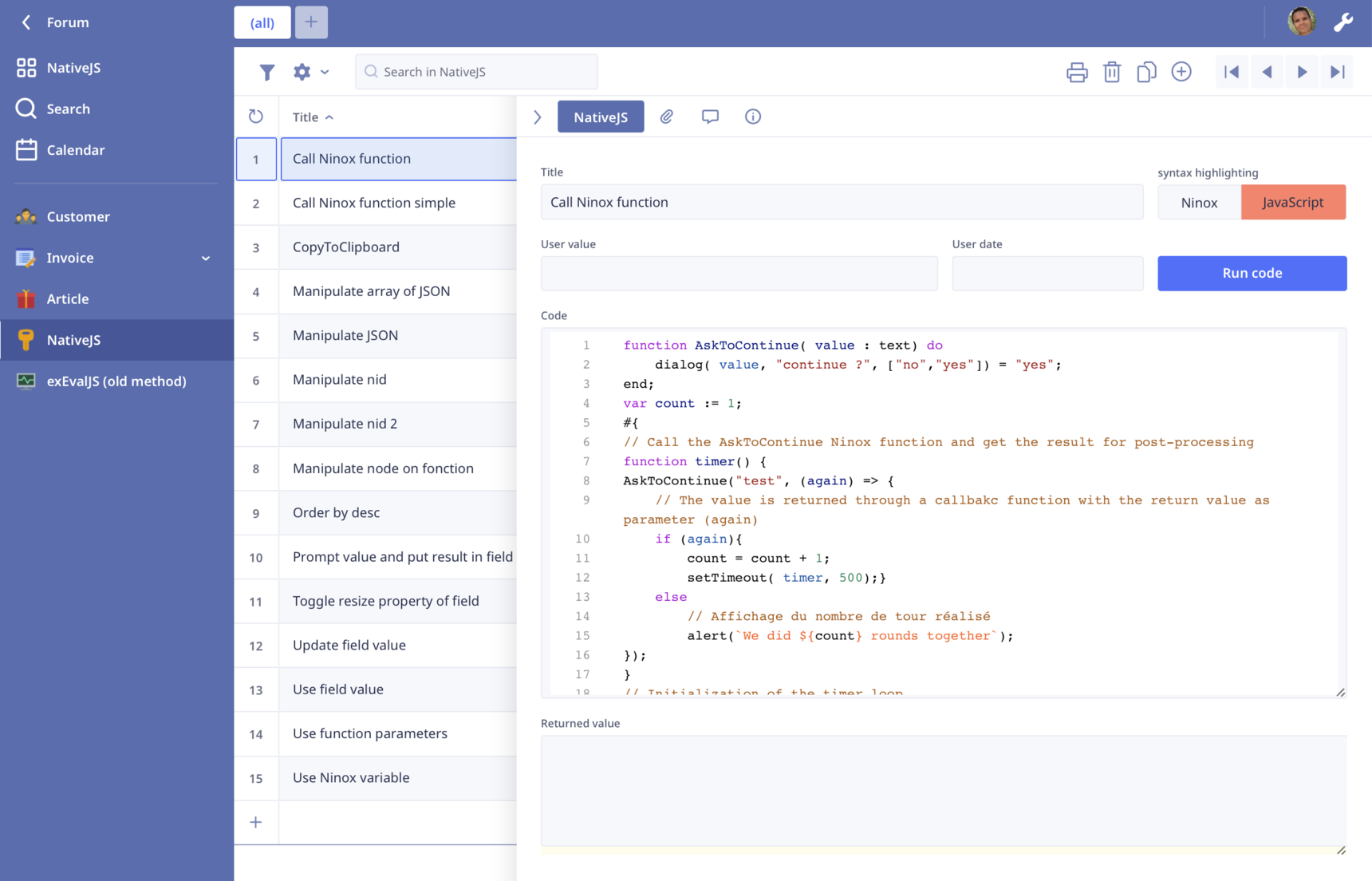 ...
Since last week when I posted this text, I've made some changes in NativeJS :

- It is now possible to call a Ninox function directly from NativeJS,
- Added variable from For loop for i in select Customer do #{ var a = i['First Name']}#...
- It is now possible to have direct access to field values from a variable of Node type  (var t := this #{t.Code = ... t['User value'] = ... }#...
- I added examples in the database
- CodeMirror is now the  interface to enter the code to with syntax highlighting (but not auto-completion for the moment)